By Joel Turner on October 31, 2018 in Fundraising, Tunbridge Wells

On Monday 12 November 1918, the day after Armistice Day brought an end to the horrors of the First World War, Tunbridge Wells Councillor H T Berwick convened a meeting in the Town Hall to discuss forming a new branch of the Labour Party. 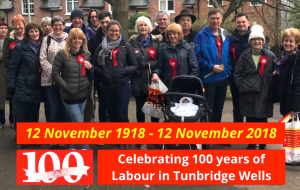 On Monday 12 November 2018, Labour party members and supporters will be celebrating the centenary of the birth of the Labour Party in Tunbridge Wells and 100 years of challenging injustice and fighting for a better deal for working people. Speakers at the event include:

Revolutionary Tunbridge Wells will be launching at the event

Join us for a social evening, some top notch speakers and of course, Birthday Cake!

View all posts by Joel Turner →