By manager on November 30, 2016 in Campaigning, Member Events, Tunbridge Wells 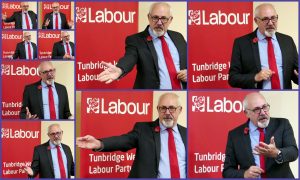 National campaign co-ordinator Jon Trickett MP was the keynote speaker at the Tunbridge Wells Labour Annual General Meeting in November. He said that it no longer mattered how people voted during the leadership election, describing it as a ‘settled decision’. What mattered now was the ‘ground war’ in preparation for the next general election.